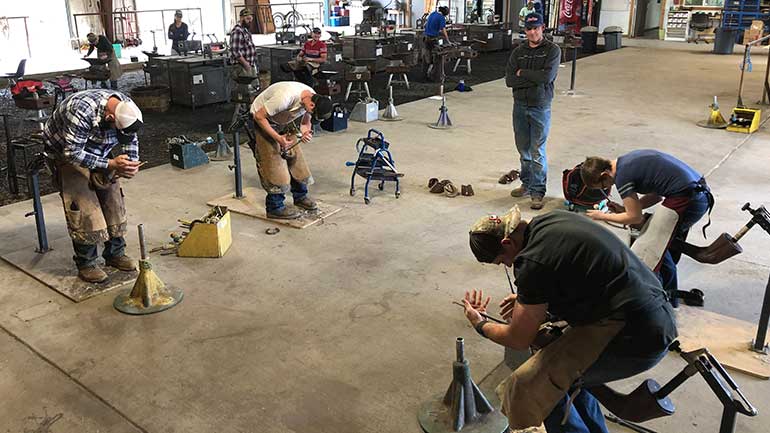 How to Gain Respect as a Farrier

We recently got a call from a past student. She was shoeing in a large barn and another experienced farrier who has been in the industry for many years was also there. From our student’s perspective, he was rude to her. He put her down and embarrassed her in front of their clients.

This farrier has accomplished quite a few things in his career. He has these accomplishments embroidered on his work shirt. Pointing to the shirt he told her she had no business shoeing at that barn until she had accomplished what he had.

Our student did not call to complain. She asked a very interesting question. How does a new farrier, fresh out of school, gain respect in the industry? Her question led to a very interesting discussion that we want to share here.

When you get out of school as a farrier, don't try to be the best farrier in the area. You just can't compete with somebody who's been shoeing for 20 years. You don't have the skill, the knowledge, or time underneath horses to be able to compete at that level.

Instead, make sure that you are not a bad choice for someone to choose to hire their horses. Focus on not being a bad farrier for the horse owners in your area. You will have to gain respect from one person at a time. There’s a lot of people that will never respect you regardless of your accomplishments.

If you believe that by virtue of your position or the level of your achievements in our profession, you are deserving and due respect, you should stop reading right about here. If you don’t believe that, you will enjoy this article.

Don't focus on yourself, focus on the client.

Don't walk in and start to focus on all your accomplishments within the industry. Insecure people do this. It’s how they lead the conversation. Instead, focus on what the client wants.

A great farrier, Mike Hayward has a saying on his business card. People don't care how much you know until they know how much you care. That’s a fact. Focus on the clients when you're trying to build respect for yourself. Earn their respect by keeping your promises and honoring your commitments.

Be on time and do the job you agreed to do. Being late is a broken promise. It tells your client you don't respect their time. In return, they won’t respect you. Don't commit to doing things that you don't think you can faithfully fulfill. It’s easy to get caught up with wanting to help and volunteer to do all kinds of things. Making way more promises than you can possibly keep leads to a lack of respect. Don’t feel guilty about saying no. You don't need to agree to do everything everyone asks you for, particularly if you're not going to be able to do it with enthusiasm and to do it well.

Doing things that you don't want to do creates resentment, and that starts problems. Be open and honest about your abilities. It takes years of exposure, study, and experience before you can walk into a barn and handle almost all situations off the cuff.

Don't extend your skills and knowledge depth to a place where you're going to drown. People will respect you a lot more if you tell them you are going to research a question and get back to them, instead of making something up to sound smart. If you do say you’re going to do that, make sure you actually follow through. It's not harmful to your reputation to let people know that you still have lots of things to learn about horses. Everyone does.

Stick By a Moral Code

Know your ethical boundaries, and don't cross them ever for any reason. This is a really important piece of advice that a lot of farriers learn the hard way. You are going to be on people's property and in their barns, sometimes without them around.

You’ll be surrounded by a disproportionate number of young horse lovers so be aware of your words and your behavior. Treat everyone with respect and you'll get that respect back. Don’t ever be that farrier that runs around from barn to barn being the carrier of all the latest gossip.

If you must talk about someone else, act as if the person you're talking about is standing right there in front of you. Even if you don’t particularly care for someone, you have to show them a little bit of respect. If you talk behind people's back, your reputation and respect is going to be nonexistent.

Don't be so open-minded that your brain falls out, but be willing to listen to alternative points of view. You don't have to agree with everything, but you should listen without harsh judgment.

It’s never okay to react emotionally to someone, but it is okay to respond diplomatically and simply speak up when you're being mistreated. This girl didn't do that and she should have. Don't just take it when someone is mistreating you or taking advantage of you.

Be professional, be diplomatic, but control your environment. You don't have to put up with people talking ill of you. Stand up for other farriers, vets, trainers, and even horse owners, when you're out in these kinds of situations. If a colleague or client is being mistreated or spoken of poorly, you don't have to agree just because the person speaking is a client of yours.

You don't have to please everyone. Don't be afraid of confrontation once in a while, as long as you're responding in a diplomatic and professional manner. Building discipline, earning respect, and overcoming adversities are all part of being a successful farrier. If you don't have a plan on how you're going to achieve those, then you'll probably never get a chance to achieve them. Apply Now