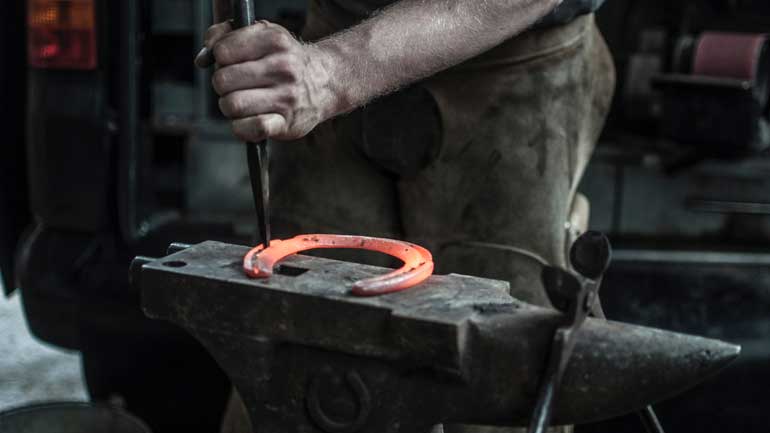 Want to Work with Horses? Your Reputation Matters

When Bob started shoeing horses, farriers always had 30 feet of cotton rope in their truck. It was common to throw a horse on the ground to shoe them. Bob was pretty handy with ropes, and he was hungry for horse jobs.

He started getting a lot of rough horses. Elk Grove had a little bar-restaurant called the EG Club, and he’d treat himself to Friday night dinners there. To get into the restaurant, he had to walk through the bar where all the local cowboys hung out. As time went by, people started waving and commenting as Bob walked through. They said he’s pretty handy under horses.

Naturally, that boosted Bob’s ego. As talk in a bar typically goes, cowboys traded stories about their problem horses, saying nobody could shoe them but maybe Bob could. This became a source of horse jobs for Bob.

Almost every day, he would have a horse laying on the ground, all four feet tied together, a length of 2x6 across its body with a couple of bales of hay on one end, and all four feet propped up on the other. That’s how he shod horses.

One day he was working on a big thoroughbred horse that nobody could shoe, and the lady asked if he had time to fix her friend’s horse. He did. He finished the horse and let him up. She was doctoring the horse, and Bob was doctoring himself because as usual, he'd had a wreck when he dropped the horses.

They sat there and waited a bit, and then Bob’s customer went to find her friend. She came back a few minutes later, sheepishly embarrassed. She told Bob that her friend didn't want someone like Bob shoeing her horse.

Bob was puzzled; he was just a horseshoer trying to make a living. He was hungry for business. If it had four legs and hair, he’d shoe it. But, at that moment, Bob realized he was developing a reputation, not as a professional horseshoer, but a cowboy who shoed rough stock, and badly-behaved horses.

Inadvertently he developed a reputation that was preventing his business from going in the direction he wanted it to go. He wanted better barns and better horses, but those people didn’t want him handling their horses the way was known for handling the rough stock.

About five years into shoeing horses Bob went back to graduate school, enrolling in Ross University’s farrier science program. When he returned to the Sacramento area, he refused to work on badly-behaved horses. The cowboys were mad. He had given something to his clients and then taken it away.

They never said thank you for five years of shoeing all our outlaw horses. They were just upset that he would no longer work for them. Bob’s reputation took another hit. From then on, he made an overt effort to develop a reputation as a professional farrier, that would provide service and quality shoeing to clients so that when his prices went up his clients would follow him.

Today, Bob uses this experience to teach our students how to develop a positive reputation from the start. If you are looking for a job with horses apply for our next block of horseshoeing classes now. Apply Now