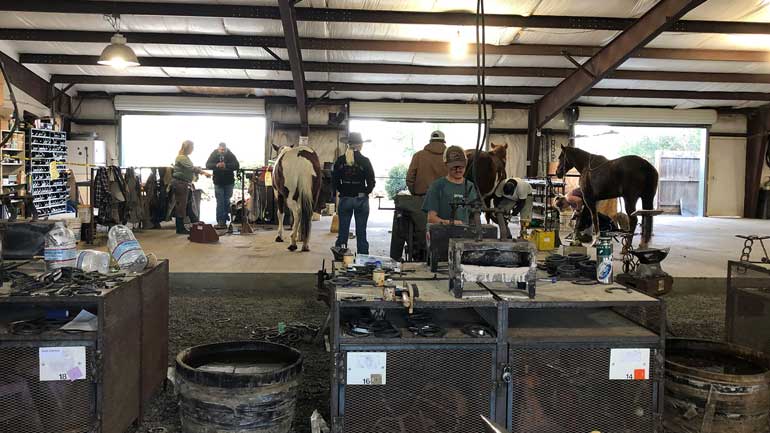 Ready to Kick Meritocracy to the curb? Take our Farrier Courses

We recently talked to a young man who was SO excited to take our farrier courses, He had tons of questions about tuition, length of the course, and other relevant details. Questions we answer all the time.

What was different about this particular conversation was his replies to our answers. He had an excuse for everything. While he was talking to us, he was actively convincing himself that the course would not fit in with what he wanted to do with life. He told us how every part of attending PCHS would be an obstacle for him to overcome on his path towards his dream.

This happens a lot, so often that Bob has coined a term for it. He calls it a mediocre life.

Mediocre is also a mindset, it's a lifestyle that some people adapt. It's a resistance to change and success. Many people think that success is never failing. They say, “I've never failed at anything.” That's not a success. That's accepting a mediocre life where you've resisted change.

Success is continuing to improve who you are, how you relate to the world and how you serve others in your life. If you think that mediocre behavior is acceptable, I've got some news for you:

“Just like exercise conditions your body and strengthens your muscles to make you more resilient, what you exercise in your mind becomes true in your life.”

When there are no consequences for mediocre behavior, you become lulled into a false sense of security, believing that mediocrity doesn't matter. The problem is, you're only kidding yourself. One day, when it's important that you step up and make a major life change, you'll learn that your skills and resilience have atrophied.

You've lost your edge. You come to realize that you've been coasting for so long, that mediocrity is not just a bad habit it's who you are. It’s time to catch yourself now before it’s too late.

Signs You Are Living Mediocre Life:

Mediocrity rears its ugly head when people have a poor attitude, misguided philosophy or bad habits. You might be living a mediocre life if:

If you’re not willing to give up your existing life, you’ll never have the life you really want.

I recently read an article by Sean Stephenson called Get off Your Butt presents some ideas that we’ve refashioned to meet this theme of living a mediocre life.

How Are You Using the Gifts You're Given?

Take a stand for your career, your life, and your health. Don’t be mediocre and wallow through life. Having raised kids, I can tell you, “it's not fair” is the most limiting phrase on the planet. It's a disease.

What are you doing to make your life better based upon the gifts that you've been given? If you are sitting around thinking life isn’t fair and comparing yourself to somebody who's taller, better looking, or stronger, you aren’t using your gifts.

Whatever is frustrating you in life right now is not as big as you think it is. Your life can change in an instant. Focus on what’s really a problem, and what isn’t. Don't invent issue after issue after issue that prevents you from succeeding.

You are your only rescue, not someone else or something else, you. Everything you need for success is in you now, where you can find it.

Happiness is not a condition. It doesn't require somebody to do something for you, to you, or with you. It's a hard-wired internal state. People feel frustrated and settle for a life of mediocrity when they feel that there's no way out, but this is just a figment of their mind. There's always a way out of situations.

People with a mediocre mindset have a fear of accepting control of their own life. It's easier to push that off on someone else. Fear of rejection or failure comes from putting too much power in the hands of others. Typically, others who hold tightly to a life of mediocrity.

Every person is born with the same potential. But when people give away their power to others, they chip away at that potential bit by bit. people. Why would you give someone who isn’t living the life you want, power over your life?

Mediocre behavior is a choice, and I hope you choose to say no.

Apply for our farrier course at PCHS today to start a career as a professional horseshoer and take control of your life. Apply Now